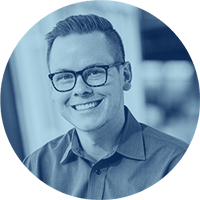 [Red Wing, MN, October 13, 2021] — Ben Maxim and Liam Petraska have joined Spave as the Chief Technology Officer (CTO) and Head of Engineering, respectively, and they serve these same roles for The Reseda Group. The Reseda Group is a subsidiary of Michigan State University Federal Credit Union (MSUFCU) which acquired Live.Give.Save to form the Spave LLC in May 2021. As part of this acquisition, the Spave team has welcomed several new team members, including Maxim and Petraska. As discerning innovators deeply experienced in the technology field for over a decade, Maxim and Petraska will be key contributors to the digital development of the Spave app, which will be updated and further enhanced for ease of use and effectiveness.

Maxim graduated from Michigan State University with a Bachelor of Arts in Telecommunications, Information Studies, and Media. His roles have varied from Senior Web Developer to Assistant Vice President of Programming and Development and, ultimately, to his current position of VP of Digital Strategy & Innovation at the MSUFCU. He has since received a Professional Certificate in Innovation & Entrepreneurship from Stanford University. Maxim’s diverse range of experience at the credit union in conjunction with his interest and studies in entrepreneurship align extremely well with the current technological needs of Spave and Spave’s long term values of innovation and creativity.

In addition to Maxim’s roles at Spave, Reseda Group, and MSUFCU, he is a founding member of the Innovation Forum at Forum Ventures, which supports a community of SaaS innovators that promotes connectivity among field members of startups and the sharing of strategies.  “The Reseda group’s investment in Spave demonstrates MSUFCU’s commitment to making a positive impact on our members and communities. Spave’s mission is to transform spending for good. Our missions could not be more aligned and we’re thrilled to be able to invest in and support the entrepreneurial spirit in a startup.” Maxim’s knowledge of website development, iOS development, programming, software development, and user interface design will be of great use to the development of Spave’s application.

Petraska received his Bachelors in Telecommunications, Information Studies, and Media at Michigan State University, where he additionally pursued audio production and was the Radio Host of The Mechanical Pulse station in East Lansing, Michigan. Upon graduation, Petraska continued to hone his production and digital audio interests as DJ/Producer at tezandtraska and Co-Owner/Manager of Uptown DJs. Subsequently, Petraksa worked as a Director of Mobile Content and later Content Delivery, Audio Team Lead, and Audio Technician at WDA, a company that specializes in digital marketing and effective online advertising. Before arriving at the MSUFCU, Petraska additionally owned a local organization, Banana for Code, in Holt, Michigan which provided website designs for personal and professional use to community organizations and members. He also was the Vice President of Content at Forj Digital, a company with a combined emphasis on visual, musical, and digital creation.

Since joining the MSUFCU in 2016, Petraska has assumed various roles for the credit union including Web Developer and, most recently, Software Development Manager. He has been a leader of large teams, a project manager, and an ingenious engineer. Susan Langer, CEO and Founder of Spave, shares, “I am thrilled that Liam has joined the team to build upon the foundation Spave has created to date and look forward to his leadership spearheading Spave's development, architecture, and infrastructure as the platform continues to grow and scale for users, nonprofits and credit unions.”

Not only does Petraksa possess a plethora of professional experiences that Spave values, but also he is a dedicated volunteer for his community, employing his digital skills for charitable ventures. Since 2015, Petraska has been involved in numerous non-profits. He initially was the Artist Service Lead for The Entertainment Helping Company and later the NextUP Team Captain, Biometrics/Account Opening Advisory Board, and NextUP Spark Mentor for MEMBERS Development Company. He currently serves as the Development Pear Group Committee Chair for the Capital Area IT Council, which supports individuals and communities in the Mid-Michigan area in their programming capabilities and additional digital topics. Petraksa’s service-orientated pursuits and application of his skills aligns wholly with the values of Spave, where value-based spending, saving, and giving is at the forefront.

Spave feels immensely grateful to have both Maxim and Petraska be part of Spave’s journey to address and support community needs by promoting healthy financial habits.

Founded in 2016 and headquartered in Red Wing, Minnesota. Spave is a woman-led tech startup using mobile technology to empower personal financial independence and charitable giving through its app, Spave. The app provides an all-in-one mobile solution for giving and inspiring social good. Spave also works directly with charities, small businesses, and other organizations to help them leverage Spave technology to reach their charitable giving goals. Spave was relaunched in the App Store and GooglePlay. Learn more about the company​ and Spave at https://spave.us/ and download our app at https://apps.apple.com/us/app/spave/id1567968091 and https://play.google.com/store/apps/details?id=com.spave&hl=en_US&gl=US.

Your email address will not be published. Required fields are marked *